Fuel is the diet of almost 100% engines used in land mowers and snow blowers. Almost 90% of vehicles run on gas in the US. It is a dynamic and valuable liquid which can go bad as early as 30-45 days unless it is stored in an airtight container. Most of the fuel containers in cars, land mower, snow blowers, and other such engines are not airtight. Unfortunately, the gas in them can go bad if it is not taken care of properly. In such a situation, a fuel stabilizer comes to our rescue.

In this article, we will highlight what a fuel stabilizer is and how it works and saves gas from going bad.

Fuel Stabilizer: What is it, and how it Works?

A fuel stabilizer is a solution that saves your gas from going stale. It forms a protective layer over the surface of the fuel that stops it from evaporating and prevents water and air from mixing with oil, which causes it to go bad and then clog the carburetor, fuel pipes, and fuel pumps. It is made from petroleum products, and that is why it does not impact the performance of the engine. Chemically, stabilizers are made from a mixture of antioxidants and lubricants to prevent evaporation and water from mixing in fuel.

Application: Where to Use a Fuel Stabilizer 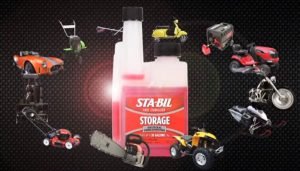 Fuel stabilizer is not for everyday use. It is ideal for engines that are not to be used for at least three weeks, a month or more than that. If you have an engine that will stay idle for a season, you must use a stabilizer in it. The best application of fuel stabilizer is using in the following engines

How to use a Stabilizer

First of all, go through the instructions on the back of your duel stabilizer container. It will tell you how much you need to add according to the quantity of fuel you are going to preserve. 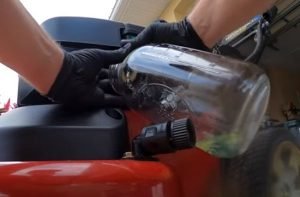 Putting the stabilizer in an empty tank is recommended for better results. Now measure the amount of stabilizer mentioned on the bottle and put it in the tank.

Now fill in the tank with fuel. While you do it, ensure that the tank is not exposed to air and water as it can impact the working of stabilizers.

One last thing to do is to run the engine for 10 minutes. It ensures that the stabilizer reaches the entire fuel system.

Please note that emptying the fuel tank is only recommended for the enhanced performance of the stabilizer. You can add the stabilizer in a half-full tank as well, and you will get satisfying results.